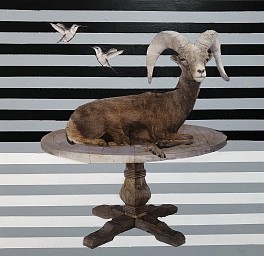 Kollabs artists Luis Garcia-Nerey and Anke Schofield, explore questions on the human construct within the forest and its inhabitants. They present a serous and provocative series of collaborative paintings and installations that create a sense of wonder evoking questions on, and of, the interaction between human life and the forest enviroment. The pair split their creative time traveling between studios in both Miami, Florida and Atlanta, Georgia in order to create there wonderous pieces.

“This grouping of works focus on the interaction between modern day human society and the forest. Our intentions are to see past the obvious environmental issues and concentrate more on an existential point of view.” ~ Luis Garcia-Nerey

In past exhibitions the artists’ focal point have not only been a philosophical one but also one that emphasizes on an aesthetic balance that resonates in their current exhibit. The heart of the series embarks on a journey in which the viewer is presented with a narrative but not a conclusion. This is an attempt by the artists’ to create an interaction between the participants and the works.

Within Kollabs  the artists’ perspective on the subject matter allows the audience to preview a familiar environment while challenging them to examine the existence of human and animal Beings. Although the main premise of the exhibit questions the human construct of the forest, it also aims to reveal an infinite source of reference points beset by the tone of the exhibit itself. Whether literal or abstract, Schofield’s and Nerey’s intentions are not to rationalize a specific idea of the forest but rather suggest that the viewer interpret the works on their own without limitations set by concrete definitions.