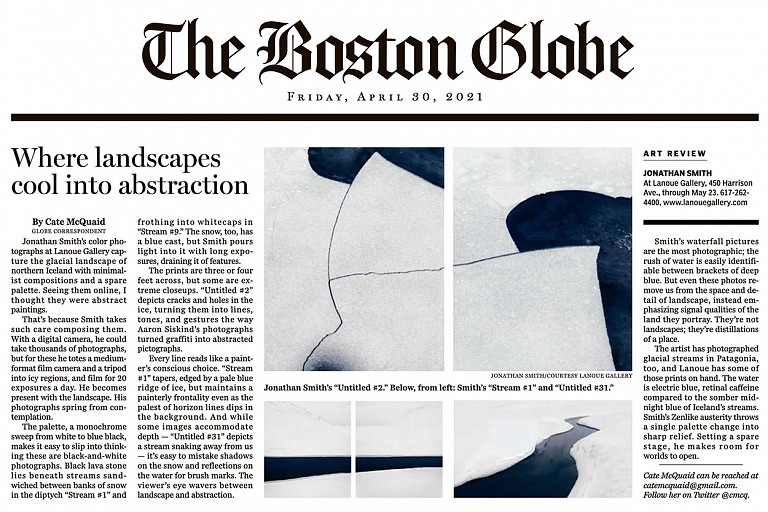 Jonathan Smith's color photographs at Lanoue Gallery capture the glacial landscape of northern Iceland with minimalist compositions and a spare palette. Seeing them online, I thought they were abstract paintings.

That's because Smith takes such care composing them. With a digital camera, he could take thousands of photographs, but for these he totes a medium-format film camera and a tripod into icy regions, and film for 20 exposures a day. He becomes present with the landscape. His photographs spring from contemplations.

The palette, a monochrome sweep from white to blue black, makes it easy to slip into thinking these are black-and-white photographs. Black lava stone lies beneath streams sandwiched between banks of snow in the diptych "Stream #1" and frothing into whitecaps in "Stream #9." The snow, too, has a blued cast, but Smith pours light into it with long exposures, draining it of features.

The prints are three or four feet across, but some are extreme closeups. "Untitled #2" depicts cracks and holes in the ice, turning them into lines, tones, and gestures the way Aaron Siskind's photographs turned graffiti into abstracted pictographs.

Every line reads like a painter's conscious choice. "Stream #1" tapers, edged by a pale blue ridge of ice, but maintains a painterly frontality even as the palest of horizon lines dips in the background. And while some images accommodate depth - "Untitled #31" depicts a stream snaking away from us - it's easy to mistake shadows on the snow and reflections on the water for brush marks. The viewer's eye wavers between landscape and abstraction.

Smith's waterfall pictures are the most photographic; the rush of water is easily identifiable between brackets of deep blue. But even these photos remove us from the space and detail of landscape, instead emphasizing signal qualities of the land they portray. They're not landscapes; they're distillations of a place.

The artist has photographed glacial streams in Patagonia too, and Lanoue has some of those prints on hand. The water is electric blue, retinal caffeine compared to the somber midnight blue of Iceland's streams. Smith's Zenlike austerity throws a single palette change into sharp relief. Setting a spare stage, he makes room for worlds to open.