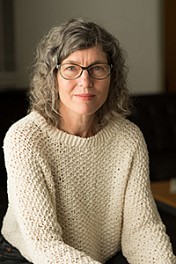 A sense of meditative equilibrium has long been a core aspect of McGee’s work; currently, there is a special focus on finding balance in distinct ways.

A new artistic direction has emerged as the work expands out from a predictable grid structure to more varied arrangements, some of which include curved shapes.

Here, each work is uniquely balanced, with acrylic panels of mixed size making up an intentional whole. As the underlying structure opens, fresh relationships develop. There is a necessity to these arrangements, an interdependence involved in each grouping.

Within her art making, McGee employs alternative ways of applying pigments and other materials to transparent acrylic panels. In addition to rust imprints and pigment evaporations, paint pours have entered the picture – much like wet-in-wet watercolor techniques – resulting in a palpable materiality.

McGee’s interest is to tap into nature, and the processes she initiates result in paintings that feel organic.  Her continuing exploration of color and texture are a poetic response to nature, each palette developing until a unique emotional vibration is achieved.

McGee has lived in many parts of the United States, having migrated from Cincinnati to Los Angeles, New York, and finally Nashville. She has worked in historic buildings as a conservation painter, and as a scenic painter for a variety of films and sets. McGee received a Visual Arts Fellowship from the National Endowment for the Arts, as well as a residency fellowship from the Christoph Merian Foundation in Basel, Switzerland. Her paintings and constructions have been exhibited regularly for the past thirty years.