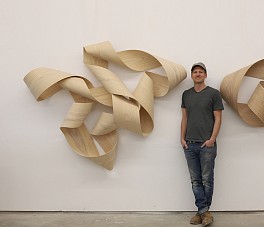 Jeremy Holmes enjoys working with wood in less conventional ways in order to expand the form and function of this most practical of building materials.  He starts by using traditional woodworking techniques in order to make very thin boards.  For this exhibition, Holmes has chosen to work entirely with hardwoods, such as white ash, cherry, and black walnut, even combining the different woods in some of the same sculptures.  After the boards are made, he soaks them over a period of time in order to soften the wood just enough to allow him to bend the boards into abstract compositions.  Following this free-form bending process, he then joins and sands each sculpture into its final permanent and interconnected state.

Holmes describes the process of torqueing a raw, solid material like wood as somewhat random and uncertain.  Even as he is bending the wood in a particular direction, the exact outcome is never entirely certain.  While Holmes may start the sculpting process with an intention, he often allows for a certain amount of randomness to occur should a new idea overtake his original plan.

Says Holmes, “With each finished sculpture, my own curiosity remains suspended in the completed piece, which keeps the creation of each work exciting for me.”   The end result for Holmes is that action, spontaneity, and improvisation can be combined with material and methodology in the quest for a beautiful art object.

2012    Torqued & Twisted, The Center for Craft and Creativity and Design, Ashville, NC

2010    Art In the Heart of the City, Juried Outdoor Exhibition, Ithaca, NY

2012    Artist in Residence, University of North Carolina at Asheville, NC

2009    NPR  “Seeing Atmosphere” Interview with WSKG's Bill Snyder. NPR artist interview 2008    Chronogram Magazine. “You had to be there” by Beth Wilson

Jeremy Holmes spent 2½ days earlier this month unspooling a coil of hardwood to fill the size of a gallery. It arcs down from the ceiling, ricochets off the walls, scoops up off the floor, and dances in great loops about the room.

You may ask: A coil of hardwood? Indeed. Holmes works with hardwood veneer — cherry, in the case of his exuberant installation at Lanoue Gallery. He soaks the thin planks in water to soften them up. The artist bends the sodden planks and clamps them until the moisture seeps out and the wood holds its form.

He attached the ones in this untitled piece end to end, and packaged them in a coil ready to unfurl and suspend from the ceiling with nearly invisible microfilaments. It’s a loose, ribbony tangle, lolling yet energetic. Standing in the middle of it, I felt elated and at ease, as if there were no hard angles in life, no weight of gravity. Just flight and grace.

The piece fills a space that used to be Kabinett’s main gallery, and Samson’s before that. Lanoue has now annexed it, and mounted this unusually ambitious installation for a local commercial gallery.

Holmes’s smaller wall and pedestal works are on view in Lanoue’s central space. They’re all closed loops of curled hardwood — a rooted, stubborn material that the artist appears to at once tame and liberate. Most are naked wood, but sometimes he paints one side, imbuing the in-and-out folds with more percussive rhythm.

His symmetrical pieces are too tamed, too pretty, like giftwrap bows. I prefer the unpredictable lines of asymmetrical works such as the white ash “Untitled (Horizontal Blue),” painted with Aegean blue. It takes a deep dive at the center, then thrusts jazzily to the right like a Bob Fosse dancer.

For his most recent pieces, “Broaden” and “Expansive,” Holmes sculpts wider planks, roughly 10 or 11 inches across. They are even more challenging to manipulate. Yet they feel generous and substantive, their curves a great embrace. Like lasagna noodles rather than tagliatelle, you know they will hold more sauce.